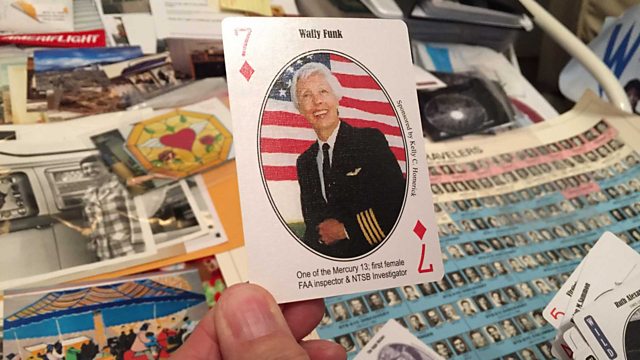 Women with the Right Stuff

Aviator and aspiring astronaut Wally Funk pays tribute to pioneering women from the past, present and future of space travel.

The first footsteps on the Moon were one giant step for 'man', but from the early days of aeronautics women have also been involved in space travel. In Women with the Right Stuff, presenter, pilot and aspiring astronaut Wally Funk pays tribute to the pioneers, meets some of those involved within today’s space industry, and hears from the woman who might be among the crew for the first human mission to Mars.

Wally has first hand experience of the early days of space travel in America. She undertook secret tests to become an astronaut in 1961 and, along with 12 other female pilots, passed the extremely tough physical tests to become an unofficial member of the ‘Mercury 13’ – the women who, given a chance, could have gone into space before Russia’s Valentina Tereshkova made history.

Over 50 years after those tests, Wally is still flying (she takes her producer above Dallas in a Cessna) but she is yet to get into space. However Wally is on the waiting list for one of the first commercial space tourism flights and is prepared to make history as yet another woman with the right stuff.

Image: A Wally Funk playing card, Wally was one of the original Mercury 13, Credit: BBC