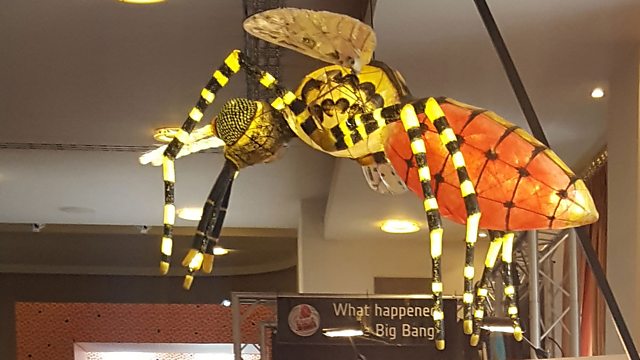 From cameras that track mosquitos to surgical robots, a look at cutting edge medicine at the Royal Society Summer Science Exhibition.

Insect repellent should, of course, deter mosquitoes - but on the other hand they need to be in contact with it for long enough to get the right dose of insecticide. Researchers from the Liverpool School of Tropical Medicine are using infrared cameras to track the movements of malaria-carrying mosquitoes as they bounce around mosquito nets – to make sure they are landing on them for just the right amount of time. The team has also developed a video game where you capture and test mosquitoes, to help train local teams in mosquito control.

Tumours are not just made of cancer cells but also lots of other healthy cells that can be corrupted by the cancer. Reporter Anand Jagatia visited a team at Queen Mary University of London, who are trying to build human cancers in the lab to get a better understanding of how they interact with healthy tissue.

We look at the latest generation of plastic body implants – including pins and screws that hold broken bones together as they heal and then melt away when they have done their job. There are even some plastics being developed that can deliver drugs inside the body.

Each year 1.5 million people die of fungal infections - more than those who die of malaria. The human body is usually good at coping with fungi, but when fungal infections get a grip on humans, usually if the immune system is weakened, they can be deadly. A team from the University of Aberdeen have developed two computer games to raise awareness of killer fungal infections.

If you needed an operation how would you fancy having a robot perform the surgery? Robot-assisted surgery is already taking place, and Faiz Mumtaz, a kidney cancer surgeon from the Royal Free Hospital in London shows us how the latest model works.

How War and Conflict Have Helped to Improve Medical Treatments

Living Under a Noisy Flightpath Can Cause Mental Health Problems