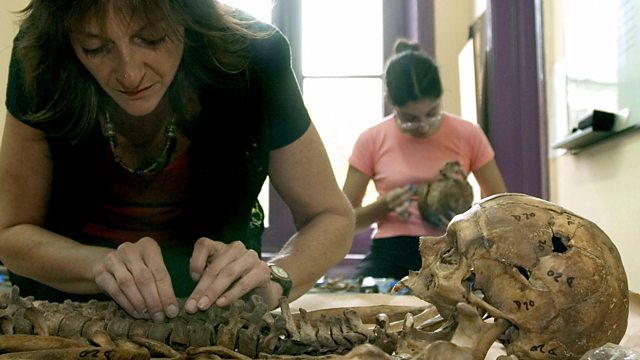 Listening to the Bones - Part Two

The Documentary Listening to the Bones
Episode 2 of 2

A ground-breaking forensic team is decoding information hidden in bones to look for Latin America's 'disappeared'.

The ground-breaking Argentine forensics team have become advisers and teachers to other teams working across Latin America, helping dig in mass graves and unearth the bones of thousands of people that provide clues to continents 'disappeared'.

Since the early 1980’s, when the famed Texan forensic anthropologist Clyde Snow taught them the techniques that convicted military leaders for large scale human rights abuses in the so called Trials of the Juntas in Argentina, the team has become the world authority in their field.

Valeria Perasso and Alejandro Millán travel to Colombia and witness the search for victims who vanished over the last decade in the country's 50-year-long armed conflict, and hear the voices of families looking for missing young students in Mexico - all with the help of the Equipo Argentino de Antropología Forense, or EAAF as they are best known. Their work now seems more relevant than ever, given the need to identify the victims of new forms of violence.