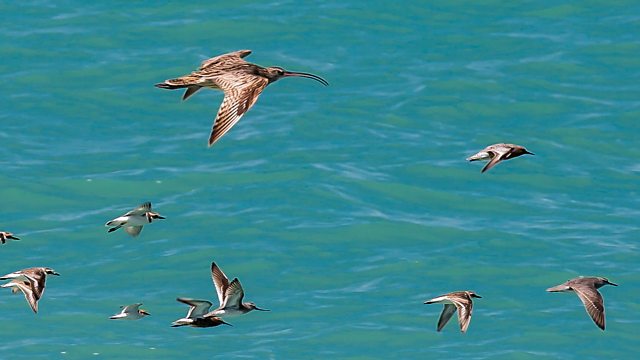 Life on the East Asian Flyway

Countless birds fly north from Australia to the Arctic. But Nature’s greatest migratory route is in deep trouble.

One of the great wonders of the natural world is in deep trouble.

Millions of shorebirds fly from Australia and Southeast Asia to the Arctic every year. They follow the planet’s most gruelling migratory route – the East Asian Australasian Flyway.

Join Ann Jones as she watches wading birds such as curlews, godwits and sandpipers prepare for their epic journey. They fatten up on clams to the point of obesity, to fuel the flight. They grow bigger hearts and flight muscles. Just before departure, they shrink their digestive organs to become the most efficient flying machines for their first 7 day non-stop flight.

The birds’ lives are full of danger and the most serious threats are man-made. The flyway is in peril with many species plummeting towards extinction. As you’ll hear, it’s enough to make a grown man cry.

The series is a co-production from the BBC World Service and Australian ABC Radio National.

See all clips from Life on the East Asian Flyway (2)