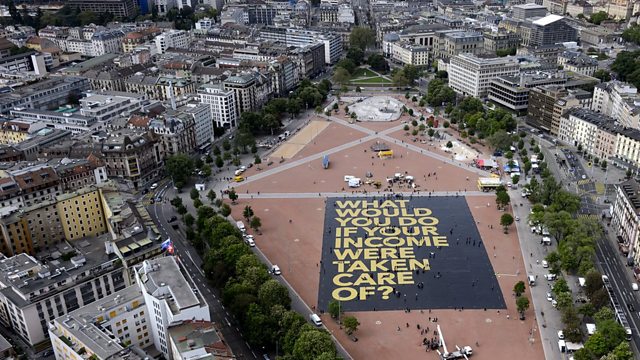 The Swiss are voting whether everyone should get free cash payments. It has been a dream of some thinkers. Others say it will distort the economy, and is not affordable.

We look at a radical economic plan being put forward by Swiss campaigners - free cash for everyone. In a referendum this weekend, Switzerland is voting on whether all its citizens, working or not, should receive a universal basic income. The idea has been around since the 16th Century, and embraced by some thinkers of both the left and the libertarian right. Now, some argue, it could have extra value and relevance given the rise of intelligent machines taking our jobs. We hear from the Swiss campaigners, from Finland where they are piloting a different version of the scheme, and we hear from Anthony Painter, director of the Action and Research Centre at the UK think tank, the RSA, who believes it provides the perfect basis for a more just and equal future society. On the opposing view, we hear from professor Kevin Milligan at the UBC Vancouver School of Economics. He says most versions of the Universal Basic Income idea are ill-targeted and unaffordable.