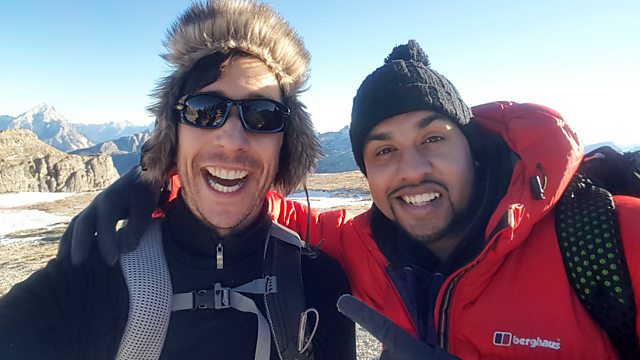 Russell attempts to climb the Dolomite mountains of Italy with partner Humza Arshad, but the pair must put aside their many differences if they are to succeed.

Russell Kane tries to prove the internet can transform him into a survival expert by climbing the historic Dolomite mountains of Italy without any survival or climbing experience. He's convinced that all knowledge of climbing and survival can be gleaned from his mobile phone, so he isn't taking on any training - just a partner who has loads of online followers.

And that partner is Badman, Muslim internet star Humza Arshad. Badman has barely ventured outside of London, so how he'll cope with the dizzying heights of a mountain range that claimed thousands of lives during World War I is anyone's guess. Our two idiotic adventurers will need to put aside their differences, which turn out to be plenty, in order to risk life and limb in search of the bigger prize.

Without a bit of climbing knowledge, the idiotic internet explorers will be clinging to their mobile phones for dear life as they dangle from sheer rock faces, try to digest goat entrails and nosedive a helicopter, all in an ill-fated bid to prove that internet is harder than mountain. Things get so desperate that they question whether snail meat is considered halal, but things might just take a turn for the better as they find an intriguing use for a selfie stick.