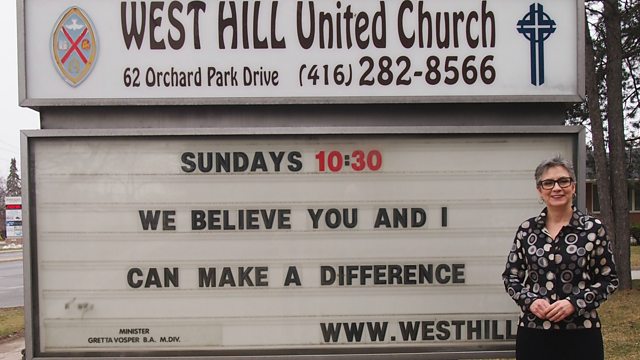 Gretta Vosper, the minister in the United Church of Canada, who does not believe in God.

Reverend Gretta Vosper is a minister in the United Church of Canada, an author and an avowed atheist. She is open about her lack of faith in a supernatural God and preaches that acting like a Christian is more important than believing like one. Now her controversial beliefs are testing the limits of her famously liberal church, and may lead to her being defrocked.

Jennifer Chevalier travels to Toronto to meet with Gretta Vosper and find out why her congregation prefers a church without God. Jennifer also hears from a minister who feels Gretta’s views are fundamentally at odds with what the United Church of Canada stands for. But a meeting with a third minister reveals that Gretta’s views are not as rare as they might seem.