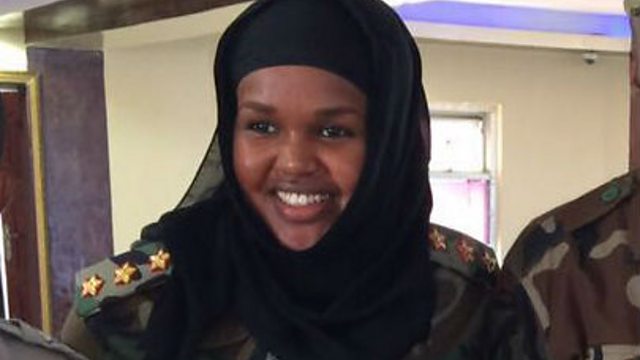 Woman on Frontline Against al-Shabab

Iman Elman is a captain in the Somali National Army leading a team of soldiers liberating towns and villages from the control of the Islamist militant group al-Shabab. The 24-year-old is unusual as women make up only 7% of Somalia's military and very few of them go into combat. Her father Elman Ali Ahmed was a peace activist whose motto was "put down the gun, pick up a pen".

When the German soprano Diana Damrau was still a student she had an operation which affected her throat and threatened to end her career before it had even begun. Kim Chakanetsa learns how Diana went on to build a successful career including an acclaimed performance as the tragic heroine Lucia di Lammermoor at the Royal Opera House in London.

Nigerian artist Olumide Oresegun's hyper-realistic paintings went viral on the internet this year and brought his work to worldwide attention.

Film-maker Avo Kaprealian grew up in the Syrian city of Aleppo. After fierce fighting between government and rebel forces broke out in his country, Avo decided to document what was happening around him. For three years he filmed from the balcony of his apartment in the city's well known Armenian quarter on the frontline between the warring factions.

Chris Deakin had absolutely no farming experience when he gave up his job managing a small business and started an alpaca farm in Leicestershire in the English Midlands. At first he wanted to sell the wool from the animals, but as he told BBC's Ruth Sanderson, he soon discovered that they could have a therapeutic role too.

Shocking Find in Search for My Parents