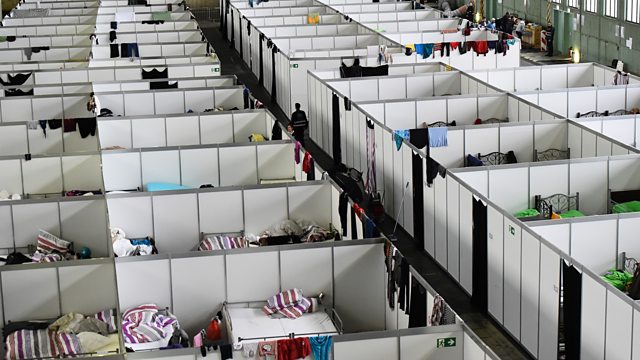 Berlin's historic Tempelhof Airport closed in 2008. Now its hangars are being used to house migrants. Matthew Bannister meets people whose lives are linked to the airport.

Berlin's historic Tempelhof Airport has recently become home to nearly 2,000 migrants. It was built by the Nazis in the 1930s. It played a vital role in the Berlin Airlift in the 1940s. Throughout the Cold War the US military operated from here, alongside commercial flights. The airport closed in 2008 after a long political battle over its future. But now, Tempelhof is buzzing again. The empty hangars have become a temporary migrant shelter.

Hans-Henning Romberg takes us on a tour round the empty terminal building. He is a Berliner by birth and a senior figure in the German aviation industry. In the 1990s, he ran a single-aircraft airline, Tempelhof Express, from the airport. But his fascination with planes stems from when he was evacuated from the airport as a child.

Musafer Mohsen Miskine is a 17-year-old circus performer from Iraq's minority Yazidi community, who recently arrived in Germany with his family. They are currently living inside one of the hangars at Tempelhof. Musafer had to flee when his home city of Sinjar was overrun by fighters from the so-called Islamic State.

For nearly 50 years, throughout the Cold War, the US Airforce was based at Tempelhof. They left behind an unlikely legacy - a baseball field, which is now used by the Berlin Braves baseball team. Their coach is Yan St-Pierre, whose day job is in counter-terrorism.

Among the thousands of migrants who have recently arrived in the German capital Berlin, the Syrian rock band Khebez Dawle, have made quite an impression. After fleeing the war in their home city of Damascus, they recorded an album in Lebanon. And when they completed the dangerous journey from Turkey to the Greek Island of Lesbos, they handed out copies of it on the beach. This has led to invitations to play live all over Europe. Matthew spoke to guitarist Hekmat Qassar and lead singer Anas Maghrebi.

The former airfield at Tempelhof has now become a giant public park. At one end of one of the runways is an extraordinary communal garden, the Allmende Kontor. One of its founders, Gerda Muennich, explains how this unconventional garden came about, and her hopes to include the migrants in the project.