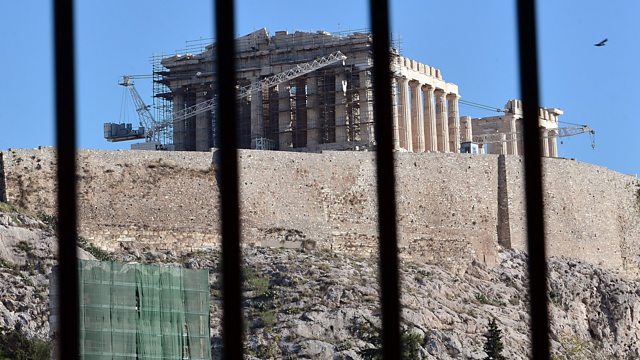 Jonathan Dimbleby and a panel of politicians and thinkers debate questions from the public about Greece and the EU.

Nowhere has felt the challenge of mass migration and pain of austerity more keenly than Greece, or has struggled harder in its relationship with the European Union. From the Megaron concert hall in Athens, the BBC's Jonathan Dimbleby discusses the issues with a panel of politicians and thinkers - The Greek Finance Minister Euclid Tsakalotos; the former Mayor of Athens and former Foreign Minister Dora Bakoyannis; underwater archaeologist and union official Despina Koutsoumba; and Josef Janning, Senior Policy Adviser at the European Council on Foreign Relations. They answer questions from an audience in Athens, and also those from BBC World Service followers on social media.

(Photo: The archaeological site of Acropolis in Athens, seen through a fence on November 2015 due to a 24-hour general strike. Credit: Louisa Gouliamaki/AFP/Getty Images)

See all clips from World Questions: Greece and Europe (7)