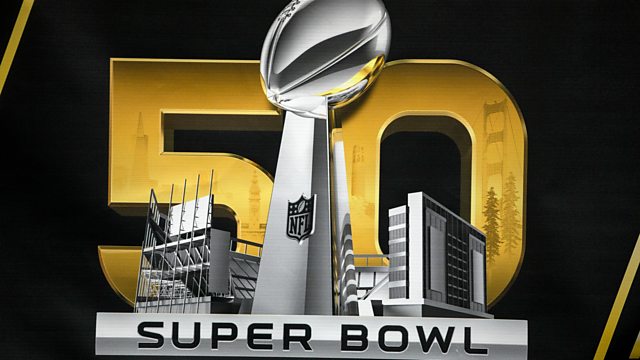 Super Bowl at 50: More Than Just a Game

As the Super Bowl prepares for its 50th anniversary, we look at the historical and cultural significance of America's greatest game.

As the Super Bowl prepares for its 50th anniversary, we look at the historical and cultural significance of America's greatest game. Our backdrop is California, venue for some of the most significant moments in the game’s history. Our backing track is the US billboard number one on the day of the Super Bowl.

Back to the Start: 1967
January 1967, the LA Coliseum the venue of Super Bowl I in the company of Tom Brown part of the Green Bay Packers team that carried off that first title (and the second for that matter). Tom not only gives a brilliant account of the day itself, but recalls some amazing stories involving him and the legendary Packers coach Vince Lombardi.

The Making of Sporting stars 1967 -1978
Starting with “Broadway” Joe Namath we look at some of the most significant names created by the Super Bowl and how they embodied an America divided by pre and post World War Two attitudes.

From a Game to an Event: 1979-1993
Jim Steeg, is known as Mr. Super Bowl - he is credited with making the Super Bowl what it is today. In charge of the game for the NFL from 1979 he tells us how he convinced Steve Jobs to spend money on the famous 1984 Super Bowl advert and in 1993 negotiated with Michael Jackson to elevate the half time show to the most watched moment of TV ever!

Breaking Barriers 1989-2016
We profile Doug Williams the first African-American quarterback to win Super Bowl XXII and how that victory helped to dispel racist attitudes that black players were “not suited to such positions on the field.” Will Carolina's Cam Newton become only the third African American quarterback to win the Super Bowl on Sunday, and does the criticism he receive have its basis in race?

Facebook and the Future: 2016
We visit Facebook HQ to find out how we will consume the Super Bowl in years to come. We speak to the team developing the latest systems that will be seen on a timeline near you in years to come, including virtual stadiums.