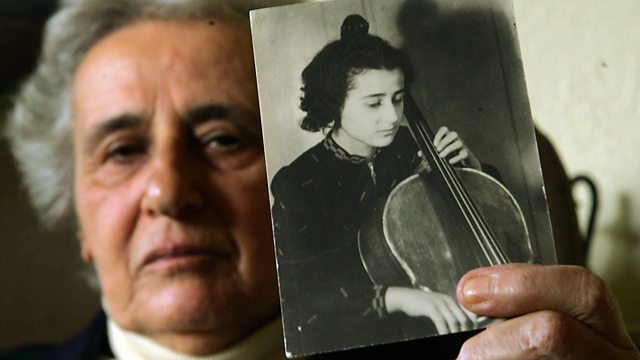 Music teacher Francesco Lotoro resurrects the music of Holocaust victims, with the help of the BBC Philharmonic Orchestra.

For the past few decades music teacher and pianist Francesco Lotoro has been collecting music written in concentration camps from World War Two.

Francesco's life is entirely given over to recovering the creations of composers and performers, many of them Jewish, who died in the camps. A massive amount of music was written in camps. Classical music by established composers, but also songs, symphonies, sonatas, operas, lullabies, jazz riffs often scribbled on old sacks, toilet paper or scratched into mess tins.

Francesco has discovered works by important composers as Hans Krasa, the Czech creator of the masterpiece 'Brundibar', aswell as Viktor Ullman and Gideon Klein - all killed by the Nazis in 1944, but writing music until the very end.

Composer Adam Gorb is head of composition at the Royal Northern College of Music in Manchester. Working closely with the BBC Philharmonic Orchestra, Adam travels to Italy to meet Francesco and together they pick through his 8000 piece archive, much of which has never been heard before.

In this special documentary, broadcast on Holocaust Memorial Day, Adam Gorb returns to Britain with a piece of unfinished music written by Viktor Ullman before his death. This piece will be performed by the Philharmonic Orchestra for the first time.

(Photo: Holocaust survivor Anita Lasuer holds up a portrait of herself playing the cello taken in Berlin before WW2. She survived Aucshwitz, in part, because she is a talented cellist and playing in the camp orchestra. Credit: Jim Watson/AFP/Getty Images)

The New Face of Development

Black Lives Matter: The Story of a Slogan