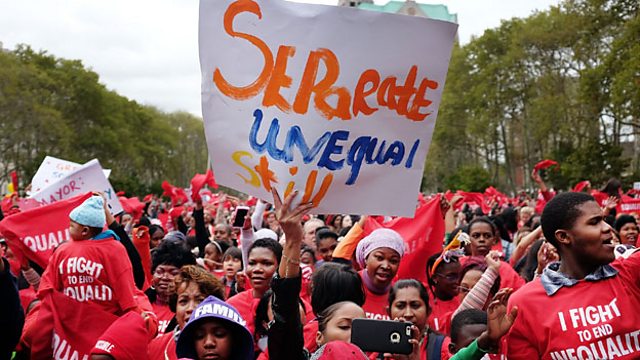 America in Black and White: Segregation

The civil rights movement was supposed to have brought Americans together, but in Kansas there is a much more complicated legacy of desegregation.

Rajini Vaidyanathan examines segregation. The Brown versus the Board of Education case and the civil rights movement were supposed to have brought Americans together, but in Kansas City Rajini sees for herself the much more complicated legacy of desegregation. On the one hand, splintering solidarity in the black community; on the other a city where white and black Americans still live quite separate lives.
Demographers suggest America is becoming less segregated, but in Atlanta, one of the big southern cities supposedly driving the desegregation, she finds the reality doesn’t quite match the statistics. Catching up with a family featured throughout the series, she finds estate agents steering black families away from white neighbourhoods.
She discusses that with Julian Castro, the US Housing Secretary, and hears about his new rules to get communities integrating. And in Connecticut she sees a community which has spent 20 years integrating its schools, without requiring it of anyone.

America in Black and White: Looking Ahead