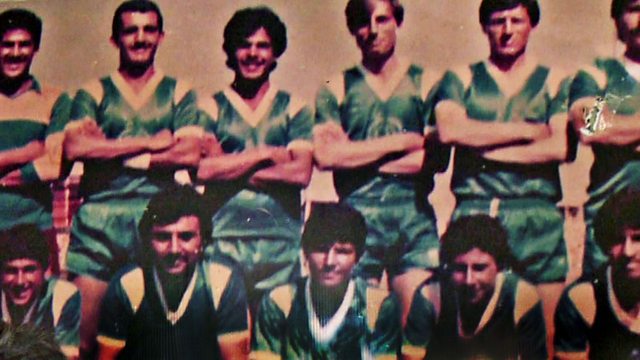 The Battered Champions of Aleppo

Tim Whewell goes in search of the football champions of Aleppo, a team torn apart by civil war. Can they ever be reunited?

A fuzzy team photo from the 1980s sends Tim Whewell on a journey to track down football players from a small town in northern Syria who were once the champions of Aleppo province. In the last four years of war their hometown, Mare'a, has become a war zone – bombed by the Assad regime, besieged by the so-called Islamic State, subject even to a mustard gas attack. And, the civil war has torn through what was once a band of friends – some now pro-rebel, some pro-regime. They are scattered across Syria and beyond, some fighting near Mare'a, some in refugee camps abroad. What have they gone through since they won that cup? And do they think they can ever be reunited?

(Photo: Photograph of a Syrian football team from the 1980s)

See all clips from The Battered Champions of Aleppo (2)