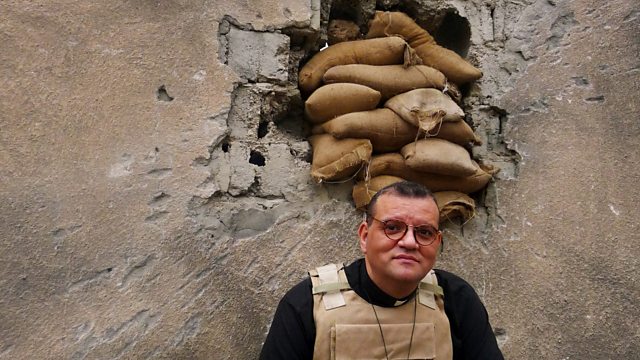 The Vicar of Baghdad in Exile

Canon Andrew White, was the Vicar of Baghdad, but like thousands of other Christians was forced to leave by Islamic State. Dale Gavlak meets him in Jordan

Canon Andrew White, was know for years as the Vicar of Baghdad, but due to the threat of Islamists in Iraq, he, like thousands of other Christians was forced to flee for his life .

He is now based in Jordan where he has set up a new Parish in the town of Amman, his parishioners are, like him, Christians in exile, forced from their home in Mosul and other parts of Iraq now held by Islamic state.

Dale Gavlak joins Canon White as he travels around his new makeshift parish which has clinics, nurseries, and a church for the Christians that have been fortunate and able to escape persecution. Dale attends Friday mass which Canon White boasts brings together Christians from different denominations to worship in one unifying service.

Alongside Canon White, Dale meets Iraqis, forced into the refugee camp linked to his parish to hear their stories of escaping IS and the role their faith has played. Dale hears Canon White's own story which has taken him to war zones around the world and questions him about his own controversial views on Israel/Palestine and the justification for war which have put him at odds with his church.

Picture courtesy Foundation for Relief and Reconciliation in the Middle East

The Father of the Happy Danes

The Power of Forgiveness