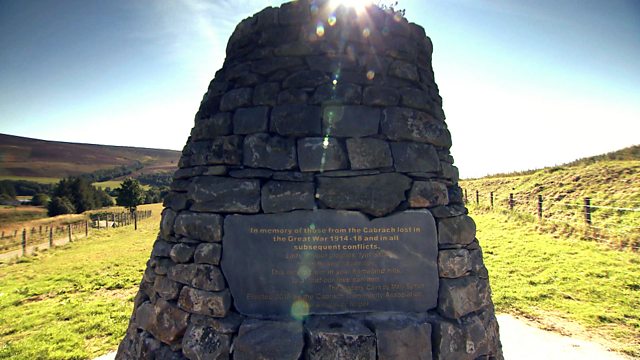 Members of the local community at Cabrach, Moray, were inspired to create a World War One memorial after hearing a Dutch historian on BBC Scotland’s Landward programme describe the area as ‘ the largest war memorial in Europe’, referring to the fact that it is a depopulated landscape with lots of ruined and empty cottages.

After the war there were few young men to continue in the family farms resulting in depopulation. Apart from the dangers of war, the Cabrach men who went to war had little resistance to disease as they generally had not left their remote homeland before. Measles killed many of them.

On hearing the comments on Landward, the community association decided that it was only fitting to have a proper outdoor memorial and have started construction of a stone cairn. Previously there was only a plaque in the church. Doudie Vipond went back to see the finished memorial.