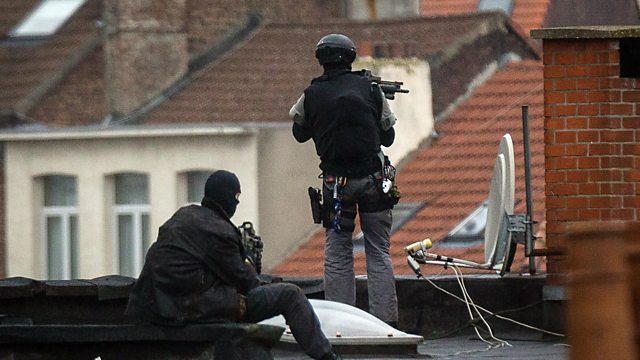 In Brussels, Jonathan Dimbleby and a panel of opinion-formers debate questions from the public about Europe, particularly in the light of the Paris attacks of 13 November 2015.

As Europe faces some of the biggest crises of modern times - the mass movement of migrants across its borders, and now the attacks on Paris - Jonathan Dimbleby hosts a discussion on these and other important issues impacting Europe. Recorded in the Royal Library of Belgium in Brussels, at the heart of the EU, you will hear from Frans Timmermans, the first vice president of the European Commisison, the Maltese MEP Roberta Metsola, the Euro-sceptic Swedish Democrat MEP Peter Lundgren, and David van Reybrouck, the controversial best-selling writer and author of Against Elections, who reads a moving postcard To the World outside Europe. The panel respond to questions from the audience, but also from BBC World Service fans via Facebook.

(Photo: Special force officers stand guard on a roof top near the scene of police raids in the district of Molenbeek, Brussels. Credit: AFP/Getty Images)

See all clips from World Questions: Europe After Paris (4)