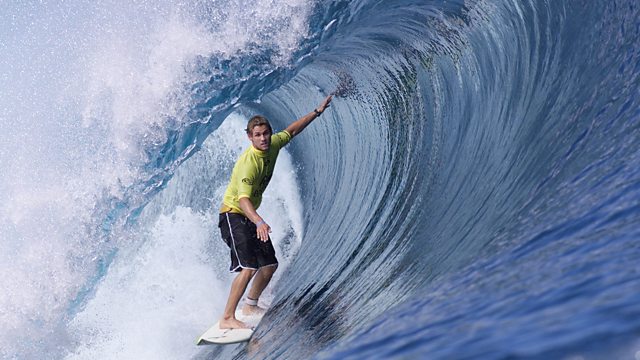 How to Make an Awesome Surf Wave

From a disappointing heap of sand bags on the southern English coast to a breakthrough break in the Spanish mountains, Helen Scales seeks the perfect artificial surf ride.

Helen loves surfing but she describes it as an extreme form of delayed gratification, especially around the British coast. Nature does not make great surfing waves to order. Waiting for the perfect wave demands patience, a warm wet suit and a cool head (especially if somebody jumps the queue and steals your ride). Becoming skilful on a surf board takes years if you can only practise on what the wild sea provides and even longer if you don’t live anywhere near the sea.

Helen goes in search of short cuts: aquatic engineering to make more and better ‘breaks’. Her quest takes her to Boscombe, a seaside suburb of the English coastal town of Bournemouth. The council spent £3.2 million on an artificial surf reef, which was designed to boost the wave height: lengthen the ride duration: and magnify Boscombe as a surfer dude magnet. It was already a spot known to the surfing folk of the Dorset coast but the artificial reef was going to make Boscombe a national surf destination. Unfortunately in 2010, the underwater construction of gigantic sausages of sand – covering the area of a football field - failed to do the job and the surfing is, if anything, now worse where the reef lies. Helen talks to the surfing scientist who diagnosed the reef’s ills with a GPS receiver down the back of his wetsuit, and to local surfers for their take on the Boscombe reef.

But Helen has to travel to the Basque Country in northern Spain to find what she’s been looking for. She has the most exciting surf ride of her life in a man-made lagoon, the Wavegarden, in the foothills of the Cantabrian mountains, kilometres from the ocean. Over the last decade a company formed of surfing engineers has invented a machine which summons up two sizes of perfect surf waves every minute. “That was a bigger wave, a faster wave, than I have ever contemplated surfing in the ocean,” she says in the programme after two rides in the Wavegarden (recorded with a double-bagged radio mic for the programme).

Wavegarden engineering has been exported to an abandoned slate quarry in North Wales where the world’s first surf park opened at the beginning of August. Other surf parks will follow in Texas in the United States, the Middle East and Australia, using the technology. This particular brand of artificial wave engineering might also allow surfing to graduate as an Olympic sport.

But is surfing an artificial wave in a land-locked lagoon the real thing? Surfing veterans have mixed feelings and share their thoughts on why riding the ocean is all-consuming.

The Genetics of Intelligence