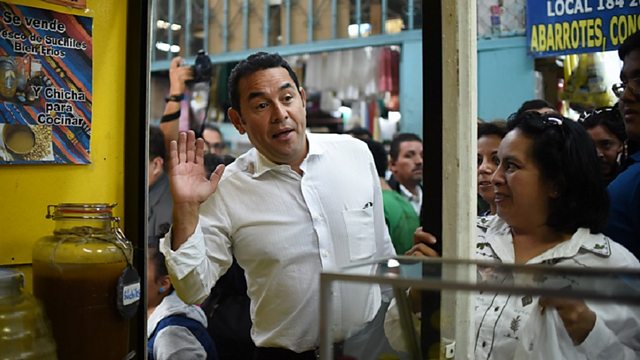 Stories of the power of public image: what Russians think of their wars abroad; Guatemala's comedian-turned President; the stuntmen of Somaliland and lavish funerals on Sulawesi

Stories of the power of public image, from very different contexts around the world, presented by Pascale Harter.

Steve Rosenberg meets a veteran of the USSR's war in Afghanistan who warns Russia against further military adventures abroad - and is reviled as a traitor for his trouble;

Katy Watson meets Jimmy Morales, Guatemala's comedian-turned President, and asks how serious he is about reforming the country's dysfunctional politics and reducing its terrible violence;

Not dead, just a bit tired: Mark Stratton is on the Indonesian island of Sulawesi to witness some of the extraordinarily lavish and costly funeral rites of the Toraja people, who might live carry on living alongside a deceased relative for as long as six months;

and Mary Harper sees thrills and spills in Somaliland, as she meets the zero-budget, high-risk stuntmen of the homegrown film studio the Amazing Technology Group, who are setting hearts athrob across Hargeisa.