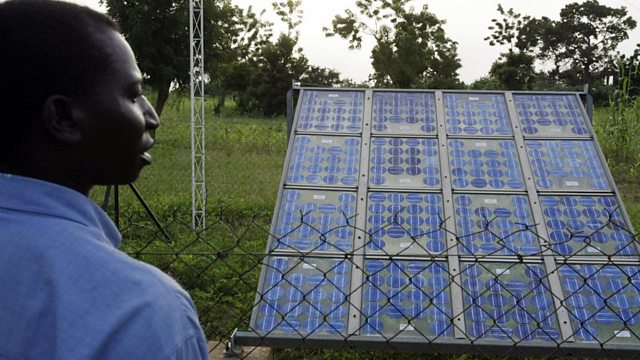 The UN hands out awards for best-practice companies ahead of Paris Climate Summit. Plus, an Oscar winning director on his film about mass extinction.

With just five weeks left till the launch of a crucial global climate summit in Paris, Business Daily is looking at some award-winning firms mitigating climate change and looking to make a profit at the same time. Azuri Technologies sells or rents solar lamps in sub-Saharan Africa. Solvatten uses the sun's power to clean unsafe drinking water. We also hear from Christiana Figueres, executive secretary of the UN Framework Convention on Climate Change, about what she expects from the Paris summit in terms of commitments, and we speak to Louis Psihoyos, director of the Oscar-winning documentary, The Cove, who has made a new film, Racing Extinction, about the link between climate change and the steady loss of thousands of the Earth's animal species. As a part of it, he has projected the sights and sounds of dozens of creatures onto the side of the UN and Empire State buildings in New York.