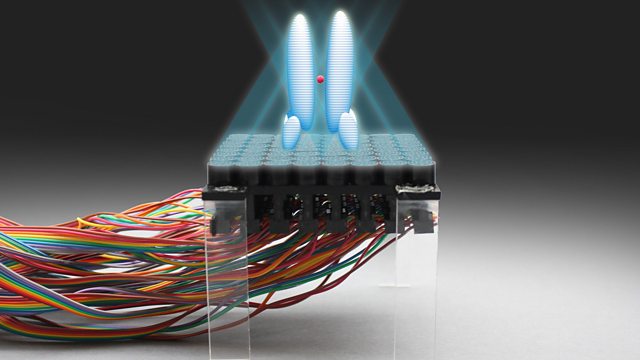 A team of researchers in the UK have built the world’s first sonic tractor beam that can lift and move objects using sound waves. The researchers used high-amplitude sound waves to generate an acoustic hologram which can pick up and move small objects. It might yield interesting applications such as a sonic production line to transport delicate objects and assemble them, all without physical contact. Click talks one of the team, professor Bruce Drinkwater.

Digital Matatus - Part Two
Michael Kaloki reports from the streets of Nairobi on board a matatu bus trying out the Digital Matatus app. The app now benefits from a collaboration with Google Maps and aims to help commuters navigate the hundreds of matatu minibus routes.

Removed
Click interviews the photographer Eric Pickersgill who has a fascinating series of photos of people using the tech gadgets for example mobile phones and tablets. Pickersgill has staged a number of portraits of people interacting with their gadgets, but the gadgets have been removed. Pickersgill joins Click to discuss our obsession with gadgets as explored in his series, Removed.

(Photo: Holograms are three-dimensional light-fields that can be projected from a two-dimensional surface. Researchers have created acoustic holograms with shapes such as tweezers, twisters and cages that exert forces on particles to levitate and manipulate them. Image courtesy of Asier Marzo, Bruce Drinkwater and Sriram Subramanian © 2015)