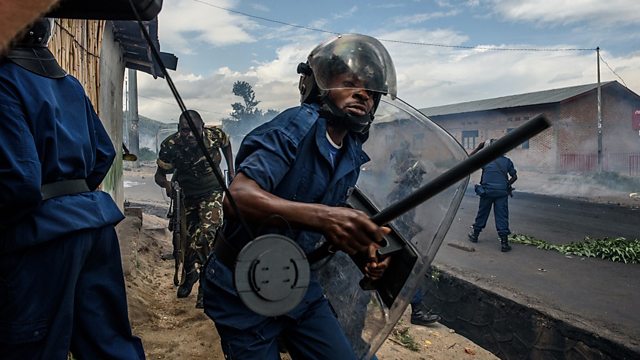 A wave of violence leaves Burundi bloodstained; migrants struggle to stay together in Slovenia; palpable tensions in Jerusalem; through Australia's deserts with wild camels

Tales of hidden - and overt - dangers in in rural and urban environments around the world - introduced by Pascale Harter.

Alastair Leithead exposes a wave of violence in Burundi: since President Nkurunziza's third term began, beatings, torture and killings by security forces have become routine, and there are other groups committing attacks too;

Nick Thorpe's in Slovenia with the migrant families struggling to stay together, and stay in touch, as the EU begins to "pull up the drawbridge" and stop their journeys to a new life;

On his regular evening stroll, Kevin Connolly feels the tension in Jerusalem and ponders the contested history of the sites and shrines all around him;

And Mary Ann Ochota crosses Australia's Simpson Desert - once so deadly they called it "the entrance to hell" - in the company of some unlikely animals: a few of the hundreds of thousands of camels, first imported Down Under in the 1860s and now thoroughly at home in the outback.

Photo: A Burundian police officer holding a baton and army forces run after protestors throwing stones during a demonstration against incumbent president Pierre Nkurunziza's bid for a third term on May 13, 2015 in Bujumbura. (Jennifer Huxta/AFP/Getty Images)