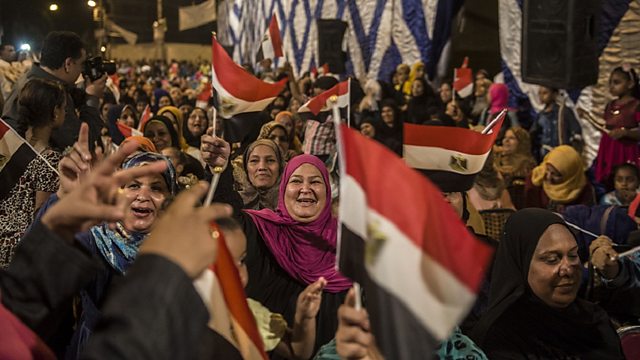 Struggles for control over Egypt's elections; the public image of the Chinese President; dirty tricks for an opposition candidate in Myanmar; man and mangrove on Senegal's coast

Pascale Harter introduces stories of wile and guile in the struggle for power around the world.

Kevin Connolly is in Cairo, reflecting on Egypt's parallel urges towards anarchy and authoritarian rule, and how the wheel of revolution and counter-revolution has turned to leave the country once more under a military-industrial elite with a parliamentary veneer.

Carrie Gracie visits the childhood home of Chinese President Xi Jinping, but finds it an uphill battle to discover anything personal or spontaneous beyond his carefully-curated public image.

Jonah Fisher meets possibly the world's unluckiest candidate in Myanmar: an opposition politician not even allowed to visit, never mind canvass in, his prospective constituency before upcoming elections - a former Navy base with a retired Admiral as his opponent.

And Daniel Owen wades happily through the mud in a mangrove plantation on Senegal's coast, which is carefully nursed by a local man who wants to protect fish, fisherfolk and the livelihoods of his neighbours.

Photo: Egyptian women wave national flags during a campaign meeting of the pro-government 'For The Love of Egypt' coalition on Sep 29, 2015 in the city of Qena, south of Cairo. (KHALED DESOUKI/AFP/Getty Images)

Into the Long Grass