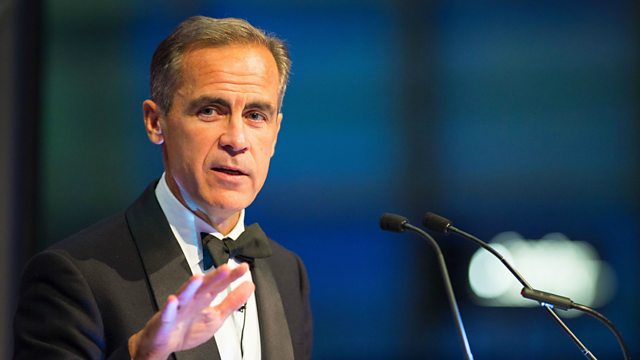 The Governor of the Bank of England has warned that if there is no immediate action, climate change could become one of the biggest risks to economic stability in the future.

The governor of the Bank of England has jumped into the controversial climate change debate and warned that if there is no immediate action, climate change could become one of the biggest risks to economic stability in the future. In a speech to Lloyd's of London insurers, the Canadian economist said that extreme weather events were becoming much more costly for the industry to handle. Speaking to the BBC Business Editor Kamal Ahmed, the governor explains why he's chosen to raise the issue now.

Fourteen global companies have launched the first business-led coalition to support the inclusion of Lesbian, Gay, Bisexual and Transgender people in the workforce. Open for Business aims to promote a positive economic case for global LGBT rights. One of the firms involved is Google, and its director Deborah Sherry told Business Matters why companies that support LGBT rights do better.

In 2014, Delhi was named the most polluted city in the world by the World Health Organization. Presenter Anu Anand visits an office block in the city that uses a combination of plants and technology to clean the air that enters the building. The building is operated by BreatheEasy Labs, a company that sells air purifiers. We hear from director Barun Aggarwal.

We'll also be discussing the housing market for first home buyers in India and the United States, hearing how to brew the perfect cup of chai, and looking back on the business interests of baseball legend, the late Yogi Berra.

Throughout the programme we're joined by guests Mitchell Hartman, a senior reporter for Marketplace in Oregon, and Puja Mehra a journalist for The Hindu newspaper in Delhi.

(Photo: The governor of the Bank of England Mark Carney speaks at a dinner at LLoyd"s of London. Credit: Press Association)

Shell Freezes Plans to Drill in the Arctic