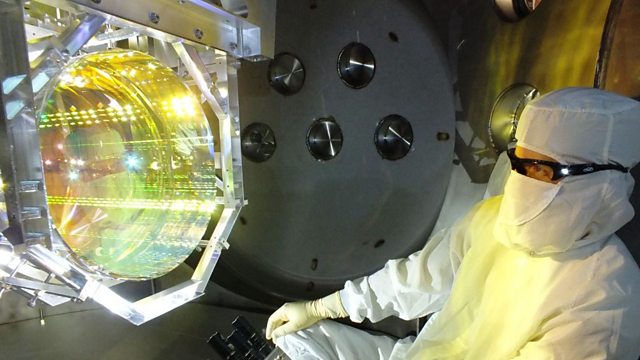 A New Ear on the Universe

Aleem Maqbool journeys to Hanford home to the remote LIGO observatory as, following a major upgrade, the detector completes the final trial tests as it prepares to go live.

Visions of the universe exert an eerie silence. But as Aleem Maqbool reveals in A New Ear on the Universe all this is set to change. Physicists are racing to develop a cosmic hearing aid which will bring us the Universe’s equivalent of sound - gravitational waves

It’s the largest lab on the surface of the planet - located in the Columbia Basin region of southeastern Washington. LIGO, the Laser Interferometer Gravitational-wave Observatory, with its giant laser beam arms totalling 5 miles across the remote Hanford desert, is seeking to detect gravitational waves -- ripples in the fabric of space-time. First predicted by Einstein in his theory of general relativity, gravitational waves are produced by exotic events involving coalescing black holes, neutron stars and objects perhaps not yet discovered and even the remnants of gravitational radiation created by the birth of the universe. The giant lab is atmospherically set adjacent to a former nuclear reactor whose village workers have long disappeared, to be replaced by a new community of scientists.

Aleem Maqbool journeys to Hanford home to the remote LIGO observatory as, following a major upgrade, the detector completes the final trial runs as it prepares to go live. He examines the science of gravitational waves, and how it’s both an eye and an ear on the motion of distant objects. He scrutinises its cutting edge technology of almost unimaginable sensitivity to enable detection of some of the universe’s most dramatic events. And he examines the passion and the motivation of individuals who have worked for nearly three decades on a single science experiment, engaging in the stories of those who invented a whole new branch of physics in order to prove the last piece of Einstein's theory of general relativity, and to “hear” the universe in a whole new way.

With its laser beam tubes the observatory will be chasing a signal from deep space as small as a thousandth the diameter of a proton What will we expect to hear? The death cries of a supernovae? The mating calls of merging black holes?

Wall in the Head

See all clips from A New Ear on the Universe (4)