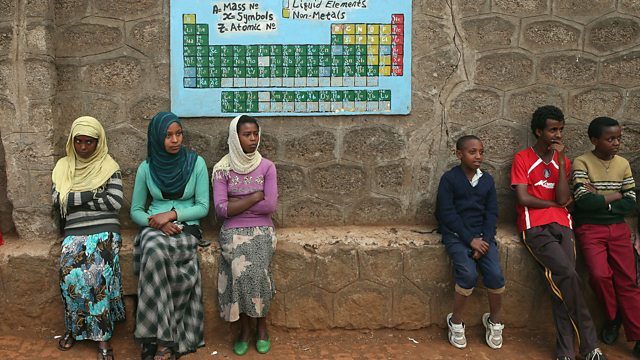 The Documentary Africa Surprising
Episode 1 of 2

This year the United Nations will bring together the world’s countries to agree goals for sustained global development. These follow on from the Millennium Goals aimed at reducing poverty and improving the quality of life for all citizens of the world.

One of the key areas for action has always been seen as Africa. But Africa is a changing continent. In this first of a two-part series, Hugh Sykes visits Mozambique and Ethiopia, and reports on stories of change and innovation.
In Mozambique he finds a strong women's movement trying to overcome a deeply entrenched tradition that expects women to get married, raise a family and stay at home. And in Ethiopia he meets a new legion of health workers saving hundreds of babies' lives - the number of children who live beyond the age of five has doubled since the year 2000.

Photo: Secondary school students sit under the periodic table of the elements in the courtyard at a training centre and school in Addis Ababa, Ethiopia, 2013.
Credit: Sean Gallup/Getty Images