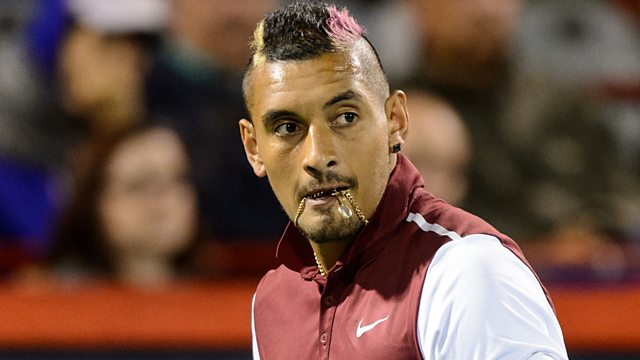 Australian tennis legend Mark Woodforde says he is ' bitterly disappointed' by the sledging comments his compatriot Nick Kyrgios made towards Stan Wawrinka.

Australian tennis legend Mark Woodforde says he is “bitterly disappointed” by the comments his compatriot Nick Kyrgios directed towards French Open champion Stan Wawrinka at the Rogers Cup in Montreal.

The 20-year-old has been fined $10,000 by the ATP for an insulting comment to Wawrinka about his girlfriend in their second-round match, which Kyrgios won when his Swiss opponent withdrew injured in the second set.

And Woodforde, who is a multiple grand slam doubles winner, says how “disappointed, shocked and surprised” he is at Kyrgios' comments and general attitude.

"As an Australian, I'm just bitterly disappointed that a fellow countryman in a competitive arena, in the heat of the battle, could come up with such derogatory comments towards another tennis player. It's appalling, it's uncalled for," he told Eleanor Oldroyd on 5 live Sport.

He added: "He's behaving very poorly, some of the behaviour that he's displayed is unsportsmanlike. We've seen it at Wimbledon and we've seen it at other events, too."

"Yes there is a line (with behaviour on the court). We've seen him straddle the line on many occasions, but he may have stepped over it last night."

This clip was first broadcast on 5 live Sport on Thursday 13th August.