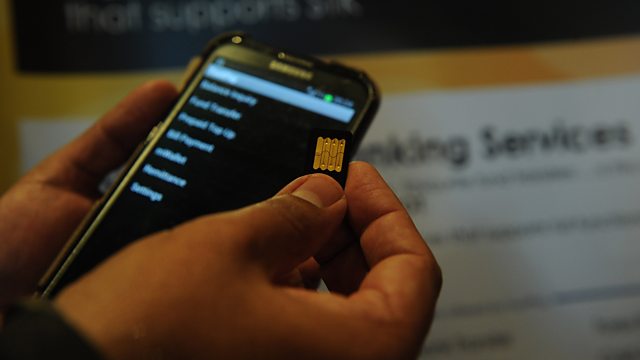 Paperless Finance Takes Off in Kenya

So far one app, M-Pesa, has moved an entire third of the Kenyan GDP among its 20 million users. With the recent launch of Equitel there is now a competitor on the market for mobile money transfer. Equitel uses ultra-thin SIM technology: a 0.1mm thin film which is placed directly on existing SIM card. This enables users to access more than one network and access mobile money services. Michael Kaloki reports from Nairobi.

SokoText
SokoText is a smart solution with a big idea: to make food affordable for everyone. We use the power of text messaging to aggregate demand for food and unlock wholesale prices for small entrepreneurs in urban slums. Gareth Mitchell talks to the co-founder, Suraj Gudka.

The Future of Raspberry Pi
Philip Colligan is the new Chief Executive Officer of Raspberry Pi Foundation. He joins Click to discuss his global vision for the future of Raspberry Pi. He has a background when working for Nesta of helping young people get involved in digital making. Examples of current projects include the Astro Pi – a competition for kids to run experiments on a Raspberry Pi that will be on the International Space Station (ISS).

New Zealand PAWS
New Zealand is heavily reliant on agricultural exports so the introduction of an invasive pest or disease could be devastating for the local economy. Pests have already caused havoc with native flora and fauna and many species are now under threat, including the flightless bird, the kiwi. But a new system called PAWS, which stands for print acquisition and wildlife surveillance can monitor pests remotely, and even be used to alert border protection agencies to threats in real time. Simon Morton reports from the outskirts of Christchurch.