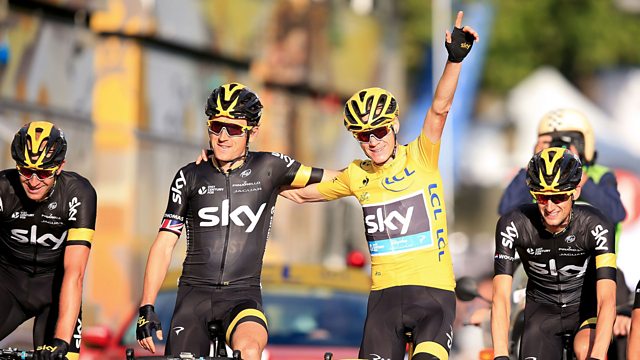 Chris Froome became the first Briton to win the Tour de France twice when he safely reached the finish line in Paris at the end of the three-week race.

The 2013 champion finished among the main peloton on the final stage, behind a bunch sprint won by Andre Greipel.

The final stage ended with 10 laps of a 7km lap around Paris but the times for the general classification were taken the first time they crossed the finish line because heavy rain in the French capital had made the roads treacherous.

That meant that 30-year-old Froome could not lose time if was held up by a crash or mechanical problem but he still had to complete the stage.

However, he stayed upright and rode over the line with his Team Sky team-mates several seconds behind the main bunch.

In this clip, you'll hear the moment Froome crossed the line to seal his victory.