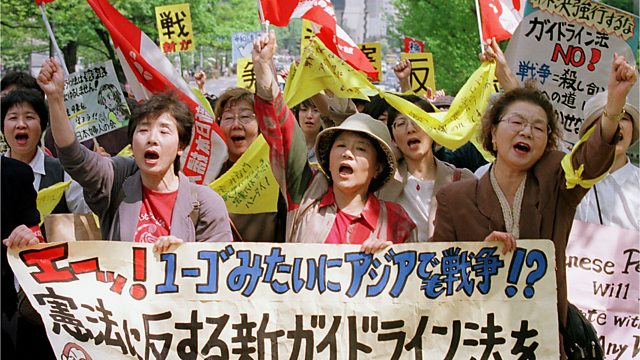 Heart and Soul Buddhism, Shintoism and 'Proactive Pacifism'
Episode 1 of 2

The role of Buddhism in the debate over Japans military future, seventy years after the end of the second world war

In January 2015 video emerged of the beheading of Japanese journalist Kenji Goto by so called Islamic State. In a recent report China was named as the country’s biggest threat to its security after a prolonged stand off over disputed islands. Against this backdrop Janak Rogers explores the current push by Japan's conservative Prime Minister Shinzo Abe to reinterpret Article 9, the famous peace clause of the post-war Japanese constitution.
Shinzo Abe's Liberal Democratic Party, together with its junior coalition partner, Komeito, want to expand the role and readiness of Japan's military. Komeito, however, is backed by the powerful Buddhist organisation, Soka Gakkai, which has traditionally fought for Japan's pacifist stance, but it’s now felt to be time for Japan to revise its pacifist position Janak asks what is 'Japanese pacifism' and to what degree is it under threat? And, will the so-called 'engaged Buddhism' of Soka Gakkai ultimately prevent or facilitate the expansion of Japan's military power?