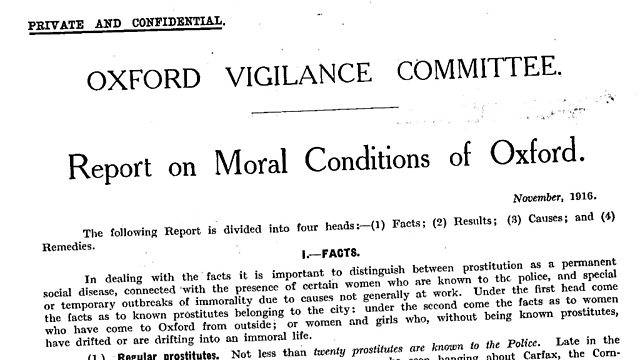 The self-appointed Vigilance Committee to maintain order in the city

As Oxford streets fell to darkness due to blackouts, a wave of moral panic gripped the city as the abnormal conditions of war gave rise to “immoral behaviour”.

In November 1916, a self-appointed group calling themselves the “Oxford Vigilance Committee” authored a report that catalogued in detail much of this behaviour, speculated on its causes and suggested “remedies”.

Self-appointed “women patrols”, working in pairs and wearing armbands, went out on the streets to record what was going on, and to try and move people on – but they had no official status or powers of arrest.

Historian Malcolm Graham recently uncovered the document, marked ‘Private and Confidential’, which captures the fears and social dislocation of a city.