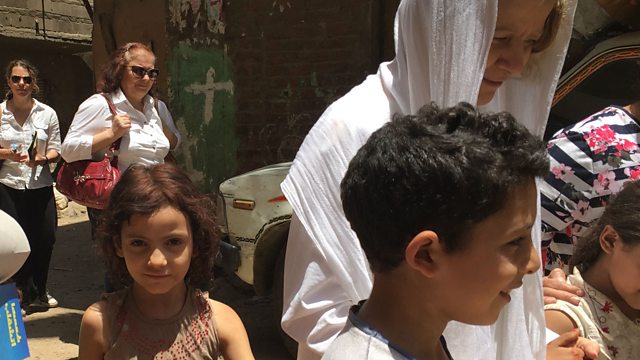 The Angel of Garbage City

Heart and Soul The Angel of Garbage City

Just outside the Egyptian capital of Cairo, in the barren and bare foothills is a slum. The slum has an industry, which is the recycling of the thousands of tonnes of garbage this vast, sprawling city produces every week.

John Laurenson travels to the slums populated by the trash collectors to meet 'Mama Maggie', a Coptic Christian nun, who has dedicated her life to helping the people of the area, feeding, caring and ministering to some of the poorest people in the country

He meets Maggie in the homes of the people here where carts pulled by donkeys struggling up the makeshift streets strewn with the stinking rubbish. This is the home of the Zabaleen, Coptic Christians who make their living recycling 9,000 tonnes of garbage per day, nearly two-thirds of the rubbish thrown away by Cairo's 17 million people.

Maggie tells John how she gave up her wealth and the trappings of her affluent Cairo lifestyle to spread the word of Jesus amongst the Copts. John finds out what life is like for Christians in Egypt who have suffered persecution in the years since the revolution of 2011 and the fall of Hosni Mubarak and as John follows her as she does her work, he find out how Copts are treated four years on, as Christians are persecuted in other countries in north Africa by Islamists.