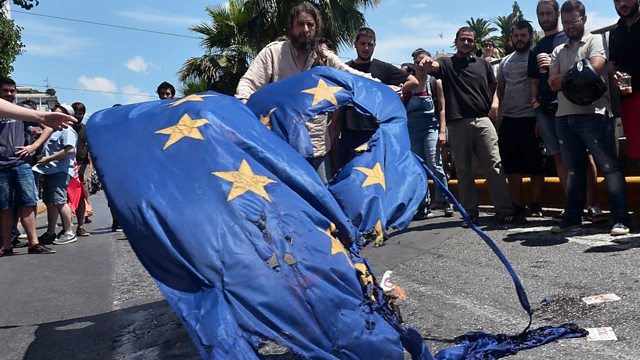 Will Greece have to leave the euro if Sunday's referendum is a No? And what does the crisis say about European identity? Plus hitting the UN's poverty Millennium Development Goal.

What does the Greek crisis and the way the European Union has handled it tell us about European identity? We speak to Alex Andreou, a Greek-born writer and actor, who describes himself as "a product of the European Union", about what he sees as the failure of a European dream of unity. Also, Hans Werner Sinn, president of the German research centre the Ifo Institute, tells us even a "no" result in this weekend's referendum in Greece will not necessarily mean that the country has to leave to the euro. But even with debt relief, should the Greek economy temporarily exit from the euro to regain competitiveness? Also in the programme, Hans Rosling, professor of global health at Sweden's Karolinska Institutet, assesses the most prominent of the United Nations' Millennium Development Goals: halving the number of people globally living in extreme poverty. (Photo: Anti-austerity protesters in Greece destroy a European flag; Credit: Louisa Gouliamaki/Getty Images)

Greece Votes No to Austerity