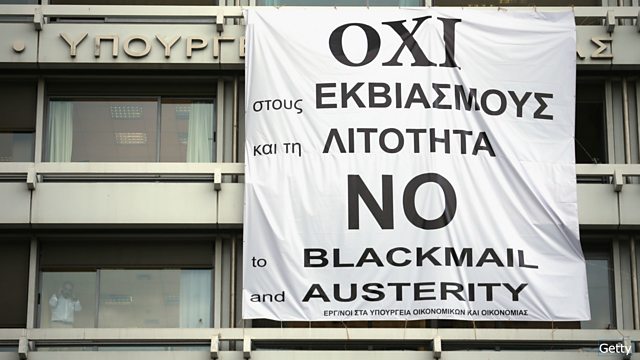 Greece Talks 'Ruled Out' Before Referendum

Eurozone finance ministers have ruled out any further talks on a fresh bailout for Greece until the country holds its referendum on Sunday.

Eurozone finance ministers have ruled out any further talks on a fresh bailout for Greece until the country holds its referendum on Sunday. We hear the latest from the BBC's Lucy Burton in Athens. Whatever happens on Sunday, and whether or not it stays in the Euro, one of the prevailing problems for Greece is its inability to tax effectively. The former head of Greece's tax collection agency is Harry Theoharris, we ask him why so many people in Greece don't pay tax.

The success (and failure) of the Millennium Development Goals - a set of 8 key development indicators launched in 2000 - will be set out in a UN report to be released next month. One of those indicators is gender equality and Ed Butler travels to Malawi to see first hand the challenge of keeping girls in school.

And, President Obama has formally announced plans for the United States and Cuba to reopen embassies in each other's capital cities, fifty four years after they closed. But how far advanced is the renewal of trade ties that was also planned? Jake Colvin from the National Foreign Trade Council in Washington tells us more.

All this and more discussed with our two guests on both sides of the Pacific: Robin Nagle, Anthropologist at New York University and Olivia Rosenman, writer with the website Storyful in Hong Kong.