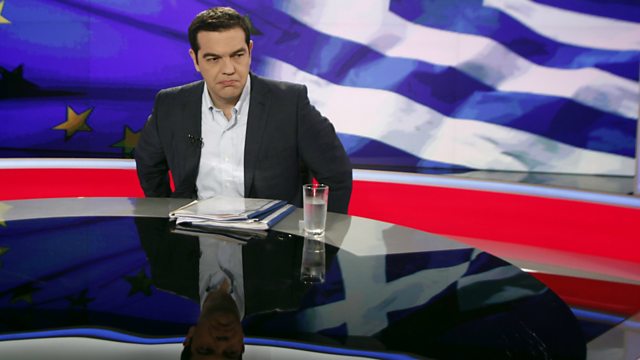 Deadline Day for Greece to Pay its Bill to the IMF

Greeks face closed banks, long supermarket lines and overwhelming uncertainty as talks breakdown between international lenders and plunge their country deep into crisis. Capital controls look set to stay in place for a week until the country goes to a referendum to decide whether or not to accept the IMF's terms on 5 July. Foreign visitors and tourists are being advised to take more cash than usual and there are even worries that some people may not have the cash to buy necessary medicines. The BBC's Lucy Burton reports from Athens amid anti-austerity, pro-Syriza protests and from outside the capital to see how the events of the last few days are affecting the country.

The Asian Infrastructure Investment Bank is open for business. The Chinese-led rival to the World Bank is a major diplomatic win for Beijing, and counts the UK, Germany, Australia and South Korea among its 21 founding members. No invitations to the party for the USA or Japan, who both oppose the formation of the bank; the US on the grounds that the Bank's governance standards are questionable and that it is a vehicle for Chinese 'soft power'. We speak to the BBC's Martin Patience in Beijing.

And, we talk to the crew with the Solar Impulse, an aircraft currently 7200ft above the Pacific Ocean as it journeys from Japan to Hawaii, powered entirely by the Sun.

Joining us for the duration of the programme are David Kuo of the Motley Fool in Singapore and Maurice Middleberg of Free the Slaves in Washington DC.