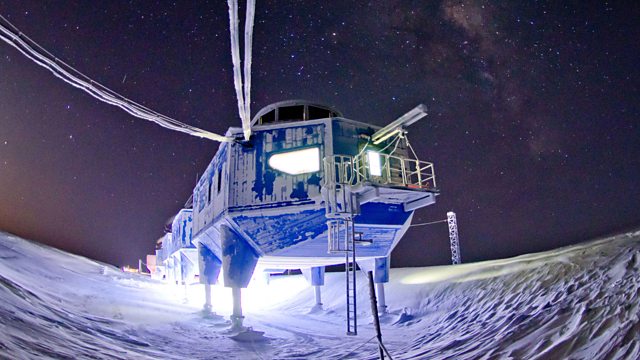 Music requests and messages for the staff at the British Antarctic Survey, Winter 2015

This is possibly the BBC World Service's most unusual programme as well as serving its smallest intended audience. It is broadcast each year on June 21st to a guaranteed audience this year of just 43 people: the men and women scientists and support staff overwintering at four British bases in Antarctica.

There are just eight among the seals and penguins of King Edward Point on South Georgia and only four at nearby Bird Island. The biggest base, Rothera, on the Antarctic Peninsula houses 19 winterers – the population can reach 100 in the Summer. Furthest south still is Halley VI on the Brant ice shelf where the Sun does not rise for many weeks and low temperatures are made worse by bitter winds. Last year, on the record coldest day (minus 55.4 Celsius), shortly after midwinter, a serious power failure called for their best survival skills. Now, there's a crack beginning in the vast, floating ice shelf on which Halley sits. But the futuristic new modules of Halley VI – the previous five bases have either been dismantled or even lost beneath the ice - are on skids and can be towed to safety by giant tractors when the light returns.

Festivities on midwinter's day are as traditional as those of Christmas. The base commanders rise early to cook breakfast for their staff, presents are exchanged, there are sports and even, weather permitting, a mad streak in the snow! Feasting continues before they gather round a shortwave set to listen to the traditional broadcast packed with greetings from their family and friends back home together with music requests and messages from the British Antarctic Survey and a few celebrities. Finally the Antarctic horror movie The Thing is screened. For those who know the plot, perhaps it is just as well there are no longer sledge dogs in Antarctica!

Presenter of the greetings programme, Martin Redfern, visited Rothera a few years ago to record science programs for BBC World Service. He says "visitors to Antarctica cannot fail to be moved by its beauty and its indifference to human presence. And that gives me deep respect for those who endure the darkest long night there. Although I was only there in the summer, I can imagine the scene now and feel I am talking to friends."