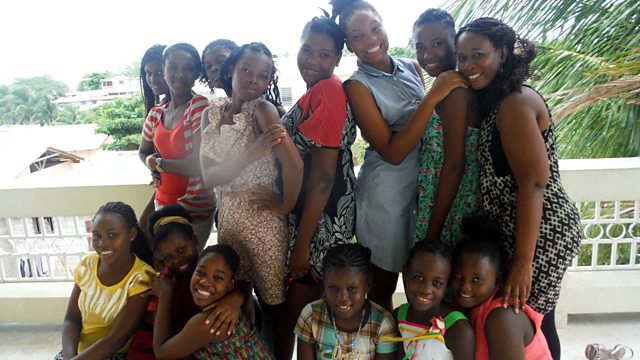 Adeline Bien-Aimé, the Haitian woman spurred by her own experience to fight child slavery

In Haiti, it's very common for children, particularly from rural areas, to be sent to live with host families so they can go to school. They're called restavek children - from the French for 'stay with'. It's thought there are maybe up to 300,000 children in this situation, but many of them end up being treated like slaves. Adeline Bien-Aimé was herself sent to live with relatives as a girl, and works for the Restavek Freedom Foundation in Port-au-Prince for other children who've escaped the system.

Postcard from Yemen - Ahlam in Aden talks about how months of war have affected her and her family - and how she had no choice but to let her sister die in front of her.

Claire Lorrimer - a 94-year-old British novelist who's onto her 82nd book, talks about why she just can't give it up.

Women in Ivory Coast have long come under pressure to straighten their hair. But there's a growing movement towards keeping it natural. Azi Oyourou, who started a hair salon in Abidjan to cater for the growing demand for natural hair styles and entrepreneur Bibi Gnagno are collaborating on a natural hair care line for African women.

And Sergio Castillo - a Chilean filmmaker who was inspired to make a film about his stray dog.

Picture: Adeline Bien-Aimé with all her girls

Remembering my Daughter Sabeen, Murdered for her Beliefs