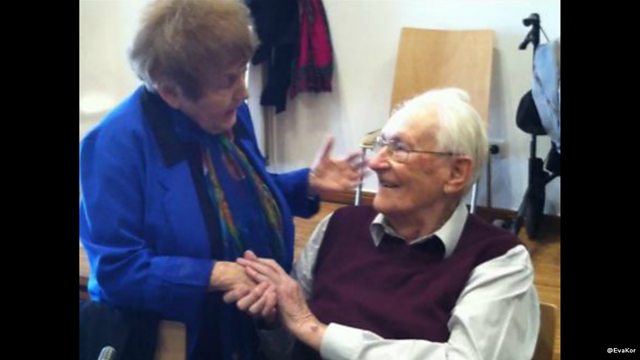 "I am not a poor person, I am a victorious human being, who has been able to rise above the pain," said Holocaust survivor Eva Kor.

Holocaust survivor Eva Kor is pictured hugging the former Nazi Oskar Groning as he stands in the dock accused of complicity to murder 300,000 people.

She had travelled to Lunenburg in Germany from the United States to testify against him and tell the court how she and her twin sister had been experimented on by Josef Mengele when they were in Auschwitz.

"I am not a poor person, I am a victorious human being, who has been able to rise above the pain, forgive the Nazis, not because they deserve it but because I deserve it.

"As long we understand my forgiveness that the victim has the right to be free, you cannot be free from what was done to you, unless you remove it from your shoulder as a daily burden of pain and anger."

Sarah Montague also asked Eva Kor if she meant to hug him:

"No not really, I was always interested in meeting him face-to-face because I believe there is a human interaction that I cannot predict and no-one can predict.

"I did want to tell him that I was there to testify and also thank him to having some human decency for accepting responsibility for what he has done," replied Eva Kor.