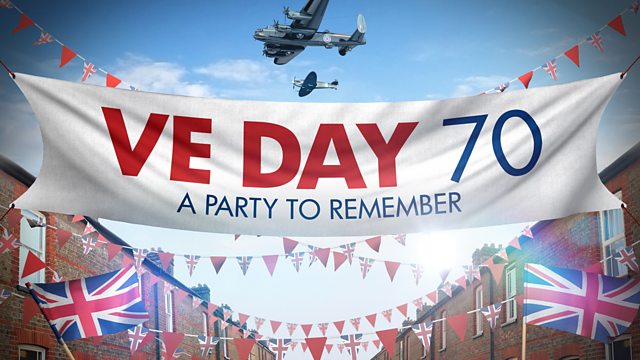 A Party to Remember

Chris Evans hosts a spectacular celebration of the 70th anniversary of VE Day from Horse Guards Parade, featuring performances of wartime songs and testimonies from the era.

Chris Evans hosts a spectacular concert staged at the iconic Horse Guards Parade in London, forming the centrepiece of the national celebrations for the 70th anniversary of VE Day. From the declaration of war through to the celebrations on VE Day, the show captures and reflects the spirit and mood of the nation at that time.

Songs from the period are performed by artists including Alexander Armstrong, Alfie Boe, Blue, Chas & Dave, Collabro, Elaine Paige, Gregory Porter, Katherine Jenkins, Laura Wright, Pixie Lott, Rebecca Ferguson and Status Quo, many of whom will be accompanied by the live big band. Diversity and the Strictly Come Dancing Professionals also take to the stage to perform two show-stopping dance tributes to the era.

The concert, which is taking place in association with the Royal British Legion, is attended by thousands of members of the public as well as a contingent of World War Two veterans and two Spitfires.

See all episodes from VE Day 70