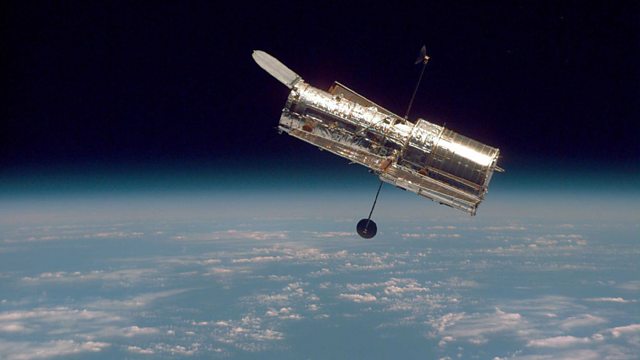 25 years since its launch, astrophysicist Mario Livio reflects on how the Hubble Space Telescope has enhanced our understanding of the universe and inspired the public imagination with its iconic images. From troubled beginnings Hubble has gone on to discover super-massive black holes, the age of the universe and along the way has made discoveries quite outside of its original observational remit.

For those who might consider themselves kitchen shy, help might soon be at hand in the guise of Robot Chef. Designed to help with cooking tasks, this prototype two-handed robot has been taking over the kitchen at a giant trade fair in Germany. Science in Action’s reporter Jonathan Amos visits Robo-chef to find out how soon it is before we can hang up the apron and leave dinner to a mechanised friend.

Virtual reality is getting a touch more real. A team at Bristol University is using haptic feedback to allow users to feel virtual touch sensations on their skin without the need for wearing any equipment at all. Science in Action’s Roland Pease visits the team to find out how the Ultra-haptic system works, what it feels like and what its future uses might be.

It’s the stuff of blockbuster films, but this week researchers have been meeting in Rome at the Planetary Defense Conference to discuss how to protect us from a meteorite or asteroid impact. Dr Detlef Koschny, Head of the Near Earth Object Segment at the European Space Agency explains how worried we should be and what measures are in place to protect against a possible future impact.

Madagascar is one of the world’s most bio-diverse areas but this richness is also a threat. Recent political turmoil has seen protected areas being ransacked for precious tropical hardwoods such as Rosewood. This logging has impacted on the wellbeing of many species and lemurs have been particularly affected. Science in Action’s reporter Lennart Pyritz meets some of the conservationists and biologists working to protect Madagascar’s unique flora and fauna.