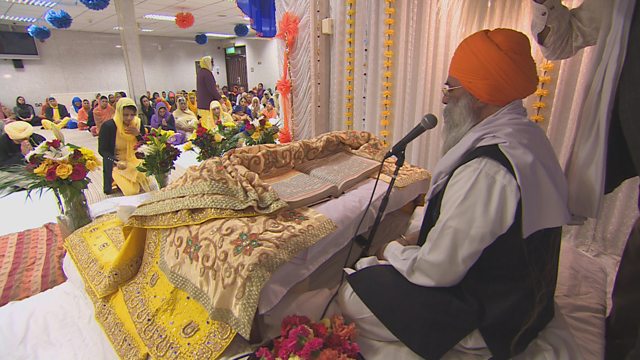 Sikhism, the religion begun by Guru Nanak, religion is introduced, looking at the beliefs, values and worship of about 500 000 Sikh people in Britain today.

Over 20 million Sikhs worldwide, and about half a million in the UK show that this is a large religious community. The Sikh faith was begun by Guru Nanak over 500 years ago in the Punjab region of India. Sikhs call God ‘Waheguru’ and they pray believing that their prayers are listened to in the heavenly court. When she was only 7, Simran went to the Golden Temple, properly called ‘Harimandir Sahib’, in Amritsar, in north India. She describes what a big experience this was.
One important Sikh belief is in the equality of all people, despite any differences such as being male or female, rich or poor. Everyone looks the same to God! This belief in equality is expressed in all kinds of ways: everyone does the washing up, everyone is encouraged to volunteer, all people sit and eat together at the Gurdwara kitchen, called the Langar.
The imagery of this clip includes film of men and women breaking some traditional roles – women reading the scriptures in the Gurdwara, men doing the washing up.
The Guru Granth Sahib is unusual among holy texts because some of it was written by Muslims and some by Hindus, as well as the teachings of the Ten Gurus of the Sikhs. No human Guru is needed now, as the Guru Granth Sahib is the ‘eternal teacher.’ Like other Sikhs, Simran refers to the Guru Granth Sahib as a person, not a book. Simran thinks it contains all the wisdom of the Gurus from history, and she values it: no other human Guru is needed by Sikhs today.
To really understand Sikhism, nothing really beats a class RE trip to the Gurdwara, but the film is a good substitute where this is not possible. 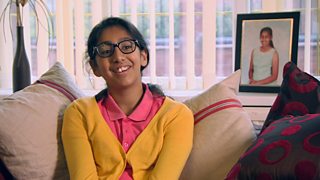 See all clips from Sikhism (9)