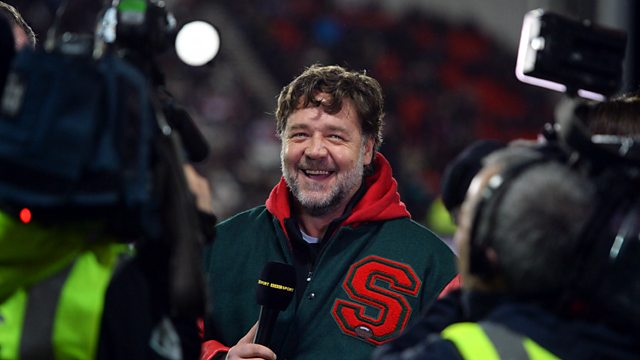 Russell Crowe on Leeds United: 'I'm getting a little impatient'

Russell Crowe says he wants "nothing but success for" Leeds United, amid rumours he wants to buy the club.

Russell Crowe says he wants "nothing but success for" Leeds United, amid rumours he wants to buy the club.

Crowe, speaking to Simon Mayo ahead of the release of The Water Diviner, would not be drawn as to whether he was officially interested in buying the Championship side, but stressed his life-long love of the club, as well as the turnaround in fortunes of South Sydney Rabbitohs rugby league side, of which he owns a 50% stake.

"I’ve followed Leeds since I was a little kid. I used to come home from sport in the afternoon, me and my brother, and watch Match of the Day," he said. "I love the club. I want nothing but success for the club. But like many other Leeds fans - and probably in fact 99.9% - I'm getting a little impatient, you know?"

"Some of your listeners may not know that I own a rugby league team in Australia which, again, is my childhood team and they were a champion team when I was younger. Then they'd fallen in to a state of disarray and they were perennial losers. So, nine years ago, I put my cheque book where my mouth is and bought the club," he added.

In October last year South Sydney won the NRL Championship for the first time in 43 years.

Crowe said that he recognises that a cultural connection with a club is as - if not more - important than money when it comes to sport.

"I have learnt a lot in nine years - it would give me nothing but pleasure to see that white army marching on together, getting back in the premiership and being where they should be."

This clip is from the Kermode & Mayo Film Review on Friday 27 March.