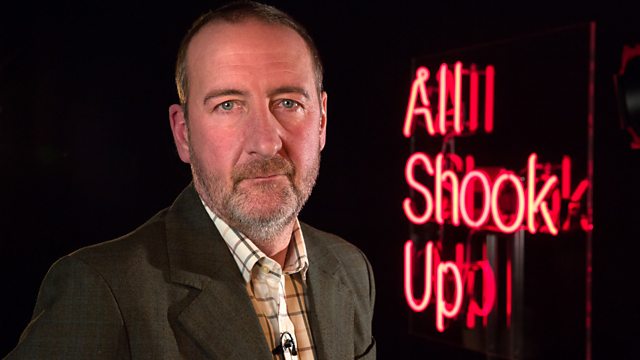 Marc Riley hosts the first in a series of four pilot episodes of All Shook Up – a brand new, live music series for BBC Music – with performances from Slug (Cockeyed Rabbit Wrapped In Plastic, Running To Get Past Your Heart); LoneLady (Hinterland, Groove It Out) and The Wave Pictures (Pea Green Coat, The Fire Alarm).

The creation of Ian Black, Slug are one of the most exciting new bands of the last five years. Their debut album ‘Ripe’ is Led Zeppelin battling Prince on the banks of the Tyne and is released through the Memphis Industries label in April (2015). The recordings were produced by Field Music maestro’s (and fellow Slug’s) Peter and David Brewis.

Julie Campbell aka LoneLady plays tracks from her second album ‘Hinterland’. A hypnotic collision of funk and industrial post-punk, it follows Julie’s debut release ‘Nerve Up’ (2010), a critically acclaimed album that led to collaborations with members of the influential post punk bands Wire (Colin Newman) and P.I.L (Jah Wobble and Keith Levine).

London based 3-piece The Wave Pictures are, according to Marc Riley, led by the finest guitarist of his generation: David Tattersall, who began his career as a youngster opening for the likes of folk legend Richard Thompson. Together with band mates Franic Rozycki and Johnny Helm, The Wave Pictures have recently collaborated with renaissance man Wild Billy Childish on their 14th studio album ‘Great Big Flamingo Burning Moon’.