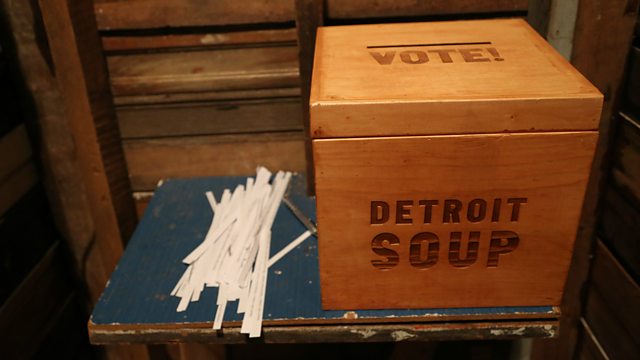 Can Soup Change the World?

Can an innovative community crowd-funding project from Detroit work in Kathmandu too?

Detroit Soup is an innovative crowd-funding dinner which is bringing people together to raise thousands of dollars for community projects in Motor City.

Since it launched five years ago, it has raised more than $85,000 for a range of start-ups working in areas such as urban agriculture, social justice and education - projects funded by, and for, the people. But could this model work in other cities?

Amy meets a team of kindred spirits in the Nepalese capital, intent on improving their community for the better. This results in the launch of the inaugural Idea Fest Nepal - but is such grass-roots activism sustainable in one of the world's poorest countries?

Amy Kaherl is the founder of Detroit Soup - a crowd-funding dinner which has raised more than $85,000 for community projects since it started in 2010.

From Detroit to Kathmandu

Veronika Scott had a bright idea to help the homeless: a coat which turns into a sleeping bag. She won funding at Detroit Soup in 2011 and today The Empowerment Plan produces thousands of coats each year.

Samantha White was given the complete works of Shakespeare by her mother, who disapproved of her listening to hip hop. Today, Samantha is running Shakespeare in Detroit - a theatre company dedicated to the bard.

Sit on It Detroit

Kyle Bartell and Charles Molnar used the money they won at Detroit Soup to build benches for bus stops - with a difference. Sit on It Detroit's benches have a built-in free library, giving passengers something to read on their journey.