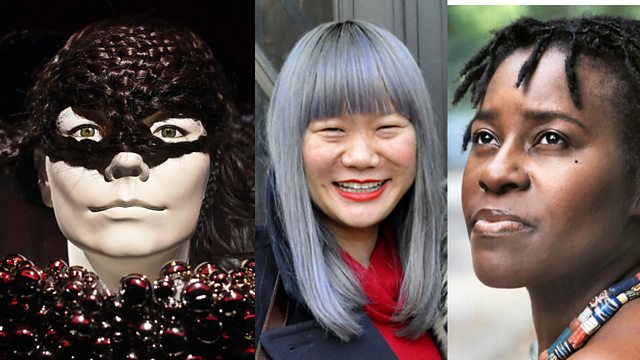 Bjorn on her new album, Aowen Jin on her work Factory Girls, Coco Mbassi on why she follows her heart, author Kazuo Ishiguro on ogres and giants, Sean Penn on his film The Gunman.

Bjork talks about her new album charting the breakup of her long term relationship, and speculates on her future. Chinese artist Aowen Jin reveals the risks she ran while making her work Factory Girls. Singer Coco Mbassi tells us why she is throwing off the constraints of the music industry and following her heart.

Pioneering harmonica teacher David Barrett takes us on a tour of his mouth! Kazuo Ishiguro explains why his new book features ogres and giants, though he is not a fan of fantasy fiction. Sean Penn discusses his film The Gunman and why stage actors possess special qualities. Linda Kennedy brings us the buzz from Art Basel Hong Kong, Asia’s premiere art fair. And we hear from country legend Loretta Lynn on why Nashville could not stomach The Pill.