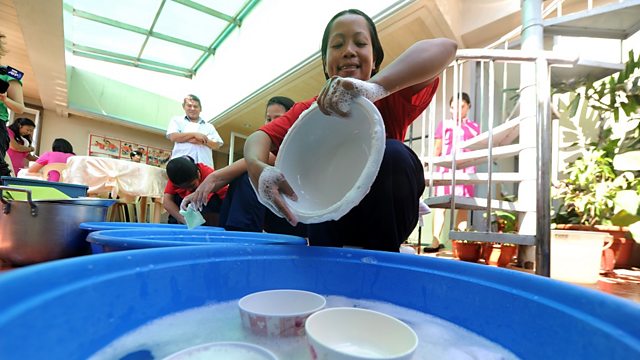 A Richer World - but for whom?

Owen Bennett Jones is on Skid Row in Los Angeles with stories from around the world about how hard it can be to make a better life for yourself.

In a special edition for the BBC World Service season “A Richer World – but for whom?”, Owen Bennett Jones introduces stories from around the world about how hard it can be to improve your living standards. He is in Los Angeles, on Skid Row, where the homeless congregate to make a home – on the street. It is but a couple of blocks away from multi-million dollar apartments. Some of those may well be cleaned by Filipina maids.

Stephen Sackur in Manila visits an academy that trains women to become house maids abroad, thus joining the 10 million Filipinos working overseas. Exporting labour helps with unemployment figures and foreign currency, but at a high cost to the women, who often have to leave their children behind for many years.

Anu Anand in Delhi reports on the poor state of the Indian railways, where the promised investment of $138bn to upgrade the infrastructure and amenities can’t come a minute too soon, as she found when she tried to take her toddler to a toilet on the train.

Amy Guttman in Serbia hears complaints about another familiar problem standing in the way of a country becoming richer - corruption. She meets businessmen who are fed up with the culture of “return favours” - something Amy experienced herself at the mayor’s office. But there are those managing to do things their own way, if only for half the normal salary.

Rob Crossan in Madagascar finds that the country has gone from bad to worse since the 2009 coup, it is now the poorest country on earth, of those that are not actually at war. All this despite a wealth of natural resources. It didn’t even seem possible to get a beer…

Photo of Filipino trainee maid learning to do the dishes: Getty Images

What peace for Ukraine?

The State of Things