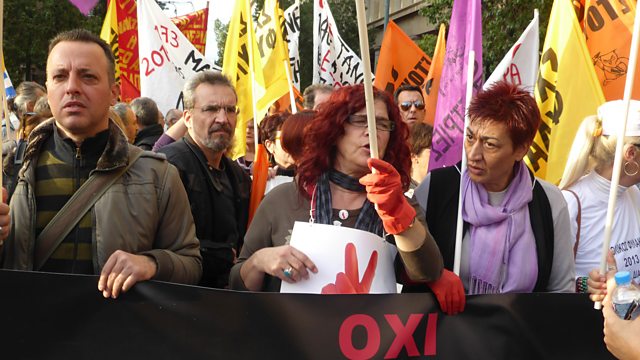 The protest by cleaners, laid off from tax offices and the Greek Finance Ministry, which has captured the imagination of those opposed to the country's harsh austerity programme.

The cleaners whose protest has captured the imagination of those opposed to the harsh austerity programme in Greece. Mostly middle-aged or nearing retirement, they have refused to go quietly. The women have kept up a day and night vigil outside the Finance Ministry in Athens, taken the government to court and resisted attempts by the riot police to remove them by force. They have challenged representatives from the International Monetary Fund and raised their red rubber gloves in a clenched fist at the European Parliament.

Some say they represent the plight of many women and the poorly paid, others that they are being manipulated by the left. Maria Margaronis hears the women's stories and asks what makes them so determined.

Japan: Should Comics be Crimes?