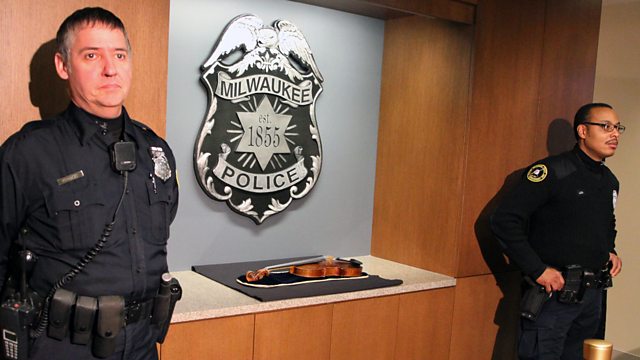 A startling 300-year journey of a Stradivarius violin through the lives of geniuses, dictators and refugees, as well as the thieves who stole it from violinist Frank Almond

The startling 300-year journey of a 'golden period' Stradivarius violin - through the lives of geniuses, dictators, refugees and ordinary people, as well as the thieves who stole it violently in 2014.

An art crime story is the beginning of a journey around the world - and through varied lives and cultures - tracing the history of the Lipinski Stradivarius violin which left the hands of the master Antonio Stradivari in 1715.

In February 2014, Milwaukee Symphony leader Frank Almond was beaten and tasered after a sell-out performance - and the $6 million violin was snatched from his hands. National US media overload followed, as the instrument had become the blue-collar city's emblem of accessible high culture. The programme explores its impact not on the musical elite, but on the life of the city and its regular people.

And from this crime scene, we get into the rich international cast and stories.

We hear the memories of Evi Liivak, an Estonian violinist whose father was murdered by the Gestapo and who played in Second World War refugee camps before marrying one of the main translators at the Nuremberg War Crime Trials and coming to America.

And there's Peter Voight the Sussex luthier whose family have been making and repairing violins across Europe since the 17th century, the lawyer of Universal Allah, the Milwaukee barber imprisoned for the 2014 theft, and the local police chief who led the investigation.

Surviving the Most Lethal Route in the World