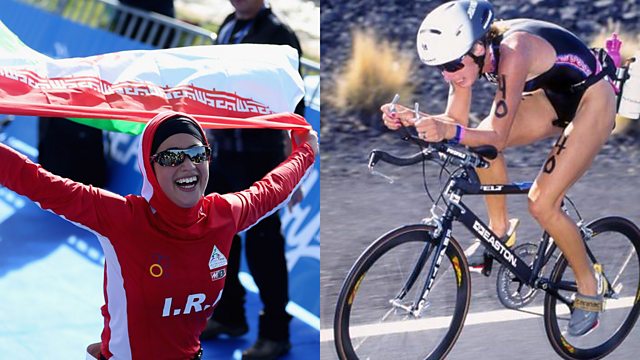 Iran's first female triathlete, Shirin Gerami, talks to an icon of the endurance sport, Paula Newby-Fraser, who won eight ultra-triathlon championships in the 1980s and 1990s.

A triathlon is a three-part sport that requires competitors to swim, cycle and run. This week we speak to two triathletes who are at opposite ends of their careers. Paula Newby-Fraser seemed unbeatable in the 1980s and 1990s, and was nicknamed the 'Queen of Kona', home to the ultra-triathlon the Ironman, and Shirin Gerami is the first female triathlete to represent Iran in a world championship. Paula shares her advice and experience with Shirin.

Paula Newby-Fraser grew up in South Africa doing sport from the age of five. Paula reveals that the triathlon start-line seemed to be the only place that was not segregated by race or gender and she also explains why she had to give up her South African citizenship to compete internationally.

Shirin Gerami is relatively new to the triathlon scene, but has made an impact. She battled through red-tape with the Iranian authorities to get permission to compete under her country's flag, and won. Shirin's event kit was a major issue as it had to comply with the rules in Iran that women must be covered. She came up with a suitable design, which has inspired other aspiring female triathletes.