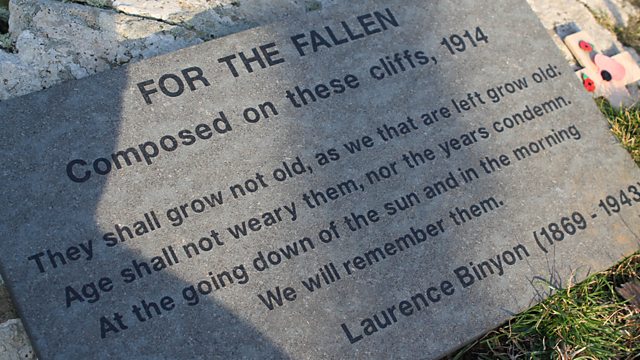 North Coast, Cornwall: Inspiration for the ‘Ode of Remembrance’

Where poet Laurence Binyon penned the iconic ‘For The Fallen’

The poet Laurence Binyon wrote the memorial poem ‘For the Fallen’ somewhere on the cliffs of North Cornwall but the exact location remains unclear. A stone plaque was erected near Polzeath in 2001 to commemorate the fact.

The plaque bears the inscription: For the Fallen, Composed on these cliffs 1914. But there is also a plaque on the beehive monument on the East Cliff above Portreath which is some way further down the coastline citing it as the place where Binyon composed the poem.

The most well-known of the seven stanzas is repeated at Remembrance Day services around the world:

‘They shall grow not old, as we that are left grow old:
Age shall not weary them, nor the years condemn.
At the going down of the sun and in the morning,
We will remember them’ (Laurence Binyon, September 1914).

Laurence is thought to have penned the words in response to the large number of casualties suffered in the First Battle of Marne and retreat from Mons (September 1914). The poem was published days later in The Times on 21 September 1914.

Professor Tim Kendall from the University of Exeter says: “Binyon was in Cornwall we know that much. I couldn’t be more precise than that. There are two villages which claim that he was there when he wrote ‘For the Fallen’. He wrote it I suspect in or around the middle of September 1914 so it’s very early on in the war, it’s about six weeks into the war. He wrote it almost certainly in response to the First Battle of the Marne which was really was around September 6th to the 12th. It was a significant battle, not only because of its casualty rate. It was as bad a battle in terms of its casualties per combatant as any that the war saw. It was a crucial turning point in the war.”

In academic and literary circles there is a leaning towards ‘Polzeath’. ‘Fisherman’s Friend’ shanty singer Jon Cleave recited the poem on the cliffs for the BBC World War One at Home Project. He is convinced it has to be Polzeath as he points out there is a hamlet close to Polzeath called ‘Porteath’, perhaps later misread as ‘Portreath’.

“Binyon was reacting to the stories of heroism in the papers, the sense that this had been a crucial turning point even in these very early stages of the war and that was what inspired him to write for the Fallen,” continues Professor Tim Kendall.

Jon Cleave is not surprised Binyon may have been inspired to write such poignant words from Cornish cliffs: “The Rumps is an old Iron Age hill fort and beyond that you’ve got Port Isaac Bay and Tintagel Head. It’s really beautiful it’s the North Coast at its best.”

So will the truth ever be known? Further proof is needed, a document perhaps with Binyon’s handwriting otherwise it may never be fully resolved.

“I don’t think Binyon solved the mystery by specifying exactly where he was, it may even be he couldn’t remember where he had been on that particular day. Poet’s manuscripts reveal a different truth normally which is that poems are written over several days, months, years in some cases. Binyon clearly wrote it quite quickly because it was published in newspapers before the end of September but that doesn’t mean he wrote it all in one day or one sitting so it’s perfectly possible there’s more than one place in Cornwall where he was when he was writing that poem,” explains Professor Tim Kendall.